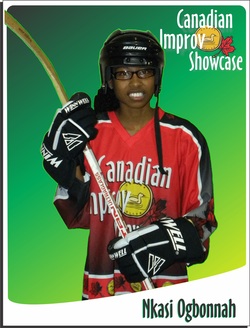 Nkasi originally hails from the New York City paced city of Mississauga, Ontario. Nkasi is an is an alumnus of Second City’s Teen Troupe, Toronto Youth Theatre (where she did ‘Jesus Christ Superstar’ and ‘Urinetown’), Second City’s Conservatory Program and graduate of Sheridan College’s Performance Preparation program as well as Humber College’s Comedy Writing and Performance Program. Nkasi is currently returned to Humber and working on getting her certificate in Comedy Scriptwriting.

Nkasi enjoys writing as well as performing around Toronto with her sketch troupe The Rulers of The Universe. And she might be in a second estrogen infused troupe who have yet to have their first meeting. And once in a blue moon you might catch Nkasi doing stand-up. Nkasi is also an avid singer and wishes she sung more often. Nkasi would one day like to have her own show on BBC.

Nkasi has performed at such venues as The Rivoli, The Second City Toronto, and Yuk Yuks.